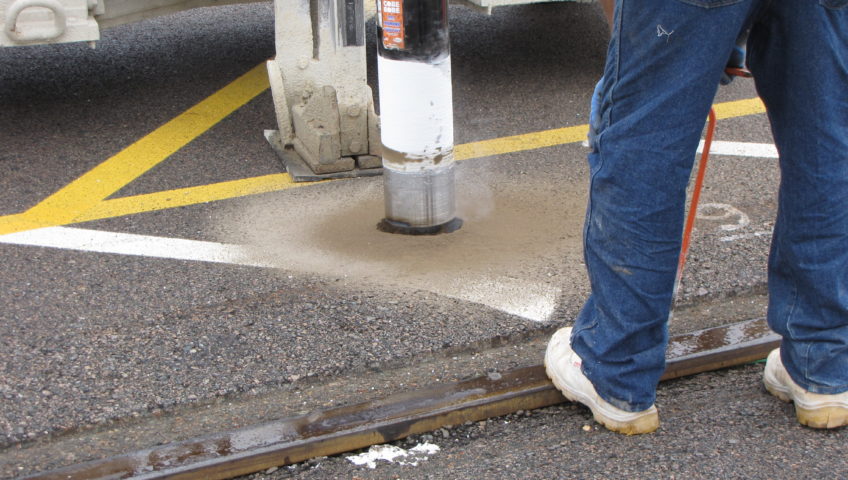 Carrasquillo Associates investigated pavement distress in a shipping container terminal in Jacksonville, Florida. The pavement consisted of a 7-to-12-inch thick asphalt pavement over an 8-inch thick base consisting of a mixture of limestone, hydrated fluidized bed ash, and fly ash from a local coal combustion electric plant. Approximately one year after completion of the project, the terminal operator noticed certain areas of the asphalt pavement adjacent to concrete drains and concrete crane turning pads exhibiting up to 4.5 inches of heave.  CA’s investigation included, but was not limited to, reviewing construction documents such as quality control test reports of the base material, extracting cores of the base material from areas of distress and non-distress for petrographic examination and chemical exposure testing to determine if the base material was exhibiting any residual expansion after installation. CA’s investigation determined that the presence of expansive compounds and poor quality control during mixing and hydration of the base material led to the delayed expansion of the pavement when exposed to moisture penetrating the joints between the asphalt and concrete pavement sections. 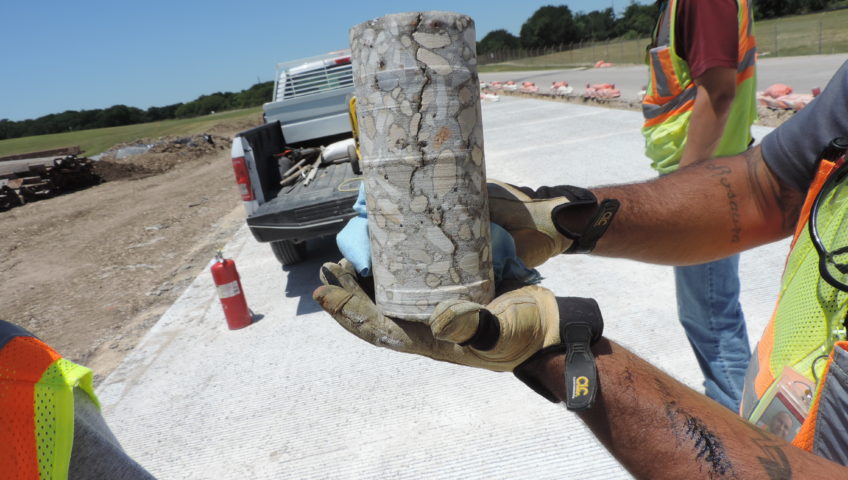 Carrasquillo Associates investigated cracking in a new reinforced concrete pavement. The cracking, consisting of regularly spaced longitudinal cracks occurring immediately over the reinforcement, was observed to have occurred a few days after the placement. CA’s analysis revealed an error in the dosage of retarder in some batches of the ready-mix concrete. In these batches, the retarder dosage was based on the entire weight of cementitious materials, rather than just the portland cement, resulting in excessive retardation. Excessive retardation made the concrete pavement susceptible to cracking due to shrinkage and dimensional movements. This propensity for cracking was exacerbated by the non-typical shallow top cover specified in the plans and drawings. CA’s investigation revealed that areas with the proper retarder dosage exhibited infrequent cracking, as compared to the extensive cracking in the remainder of the pavement where the retarder dosage was incorrect. 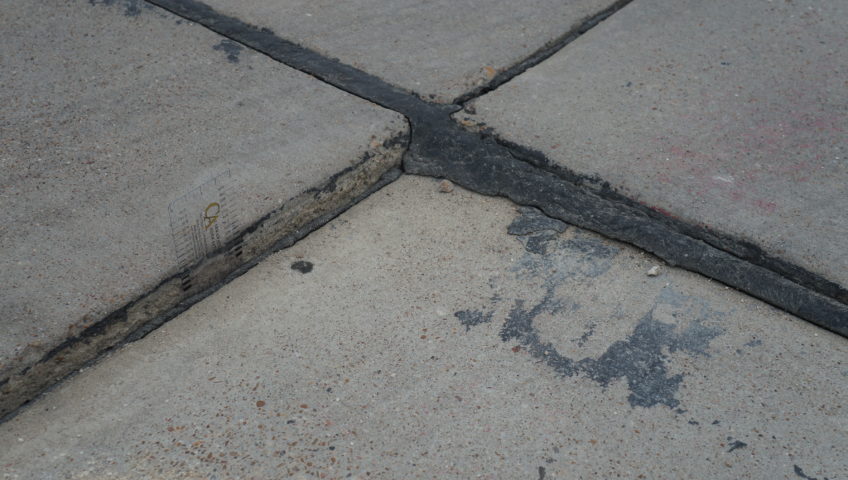 Carrasquillo Associates investigated distress in a 1,000,000 square foot concrete trucking pavement. CA’s investigation revealed two key findings. First, CA’s periodic condition surveys utilizing ASTM and FHWA practices provided clear evidence of a progressive distress mechanism. This distress mechanism began with joint sealant degradation and proceeded to water penetration, pumping, corner breaks, loss of support and faulting, and finally a completely broken pavement section. Second, CA determined that the rigid base which utilized on-site materials was mischaracterized as limestone during construction. In actuality, the base material was marl, which has a strength and appearance similar to limestone, but is moisture-sensitive, meaning strength is lost when the moisture content increases. In summary, CA’s investigation revealed that the failure to perform maintenance at the first manifestation of distress caused the premature pavement failures as a result of an improper base material 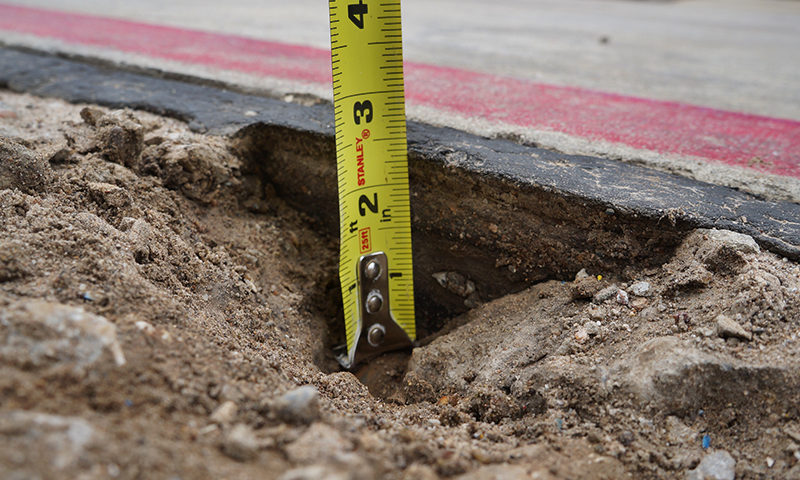 Forensic Evaluation of a Rigid Pavement

Several new warehouses for an oil drilling equipment manufacturing company were constructed in 2012 in Houston, TX.  The warehouses were surrounded by three large reinforced concrete drive lanes utilized for delivery and pick-up of large-size oil equipment parts.  Shortly after construction, the reinforced concrete pavement exhibited distress in form of spalled joints at dowel locations, pumping, and localized panel failures.  CA was retained to determine the cause(s) of the distress and provide repair recommendations.  CA’s field work included soil sampling and testing, non-destructive testing of the concrete pavement, including the use of ground penetrating radar, and relative elevation surveys to verify surface drainage patterns.  In addition to the field work, CA also performed an analysis of the pavement design to determine its structural adequacy as-designed.  Ultimately, the cause(s) of the distress was determined and a repair plan was recommended. 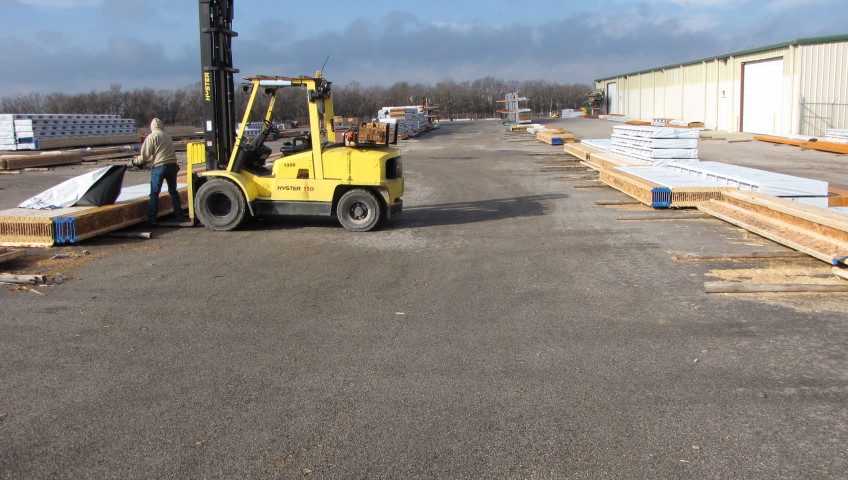 This project consisted of a 67,500 square foot warehouse distribution facility supported by concrete slab on grade and exterior Portland Cement Concrete (PCC) and Hot Mix Asphalt (HMA) pavement areas to accommodate truck traffic and storage yard areas. Several weeks after the facility was in service, the owner noticed water seeping out at several locations along the construction joint between the PCC and HMA pavement areas. Additional distress was observed in the HMA pavement in the next year. CA was retained to assess the existing condition of the HMA pavements and warehouse concrete slab-on-grade to determine the cause(s) and/or contributing factors of the observed distress, and to provide recommendations, if needed, for any remedial actions to restore its service life to that intended in the design. CA’s forensic engineering investigation into the cause of the problems included a detailed condition survey of the HMA pavement areas, analysis of results from soil borings, materials sampling, water level measurements from monitoring wells, comprehensive review and evaluation of construction related documents, and review of relevant industry standards and literature. Through its forensic engineering investigation CA was able to develop an economical plan to divert the water away from the slabs, and restore service life to the slabs through remedial action. 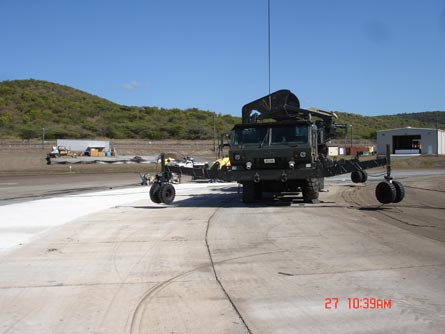 A radar landing pad in Lajas, PR serves vehicles that are used to deploy a blimp carrying surveillance equipment. The landing pad is a large circular, paved area with a diameter of approximately 200 m. Most of the landing pad is paved with asphalt, with the exception of a centered circular area, with a diameter of about 55 m, which is paved with concrete. As a result of age, the asphalt concrete portion of the landing pad was rehabilitated in early 2010. The rehabilitation involved milling and resurfacing with asphalt, along with some full-depth asphalt repair. A few months after the rehabilitation project was completed, the surface of the asphalt exhibited distress in the form of surface shear, or tearing. Carrasquillo Associates (CA) was hired to characterize the pavement distress and to review the rehabilitation design and construction records. CA performed independent pavement design calculations using the design and current heavy forklift traffic conditions. CA also reviewed the contractor’s asphalt mixture design and quality control records, which included mixture property characteristics and compaction data. The distress was indicative of heavy forklift traffic exceeding the design loading for the pavement. A rehabilitation option using a rigid pavement surface, of either portland cement concrete or resin-modified pavement was also evaluated. 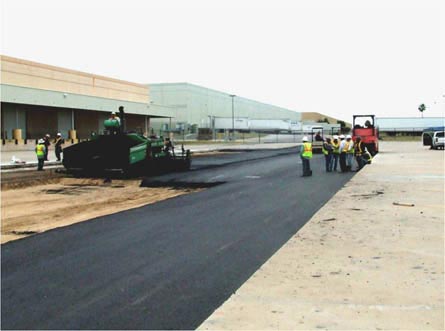 The project consisted of the rehabilitation of two concrete pavement parking lots in an industrial park in Laredo, Texas, including the removal and replacement of distressed areas as well as repairs at the expansion joints in concrete slabs. CA performed a detailed condition assessment of both parking lots to observe the distress and developed repair recommendations pertaining to concrete properties, concrete pavement thickness design, expansion joint transfer details, expansion joint sealant, drainage, preparation, material, and base and subgrade preparation. 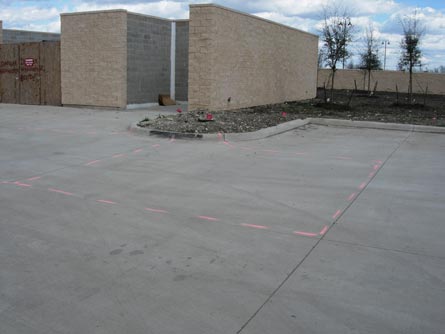 CA was retained to investigate the cause(s) of the distress observed in the concrete pavement parking lots at a complex in Murphy, Texas. The complex was comprised of four buildings and each had one or two concrete pavement parking lots surrounding it that were connected with inner drives throughout the complex. The parking lots consisted of both heavy and regular duty pavements. CA’s site visits consisted of performing a detailed survey of the cracked areas in the pavement including photo documentation, collection of concrete cores and soil samples, and observation of the demolition of selected areas of pavement. The results from the forensic examination of the concrete cores, soil samples, and construction records provided the necessary data for CA’s expert opinions regarding concrete repair methods for the pavement areas. 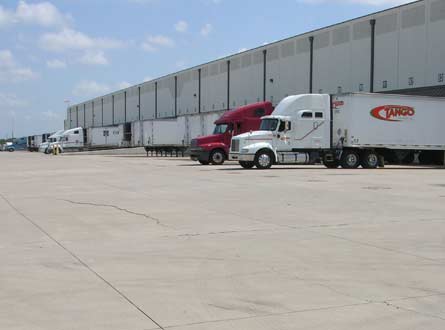 CA conducted an investigation to determine the cause(s) of the distress in the exterior concrete pavement at a distribution center facility in Houston, Texas. The investigation consisted of a comprehensive assessment of the structural integrity of the pavement using destructive and non-destructive testing evaluation techniques as well as the excavation of pits for geotechnical exploration and testing in order to evaluate the as-built soil stabilization methods. Non-destructive testing services provided on this project included ground penetrating radar scanning and relative elevation surveying. Other activities included the evaluation of the original concrete pavement design and assumptions, performance of a life cycle analysis, performance of service life calculations given the actual usage of the pavement, and review of construction related issues. CA also developed recommendations for the repair and remediation of the concrete pavement system.