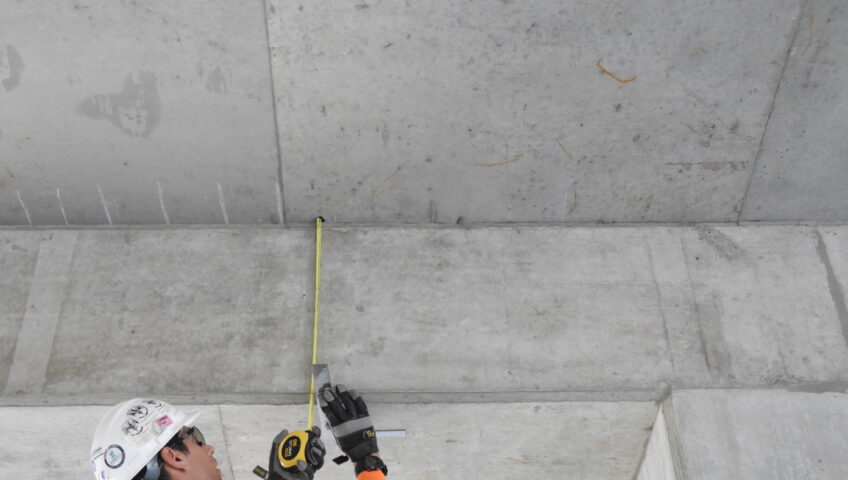 CA investigated allegations of improper top cover in eight levels of post-tensioned concrete slabs at a mixed-use office building containing ground floor retail space. During construction of the building, the concrete cover over the distributed post-tensioning tendons was allegedly inadequate at the drop beams. Eight levels of post-tensioned slabs were remediated by placing a cementitious, self-leveling topping over the entire slab to increase the top cover. CA conducted an investigation to vet the accuracy of approximately 800 top cover measurements performed by others and to identify possible trends and/or causes of any areas of improper top cover. CA performed ground penetrating radar (GPR) to measure the remediated top cover and the slab thicknesses. Rigorous calibration procedures consisting of physical measurements were employed to maximize the accuracy of the GPR top cover measurements. Using elevation survey measurements from before and after the application of the topping, CA determined the original as-built cover. CA’s investigation revealed systemic inaccuracies of the top cover measurements reported by others. Only approximately 10 percent of the measurements were less than the minimum allowable top cover. 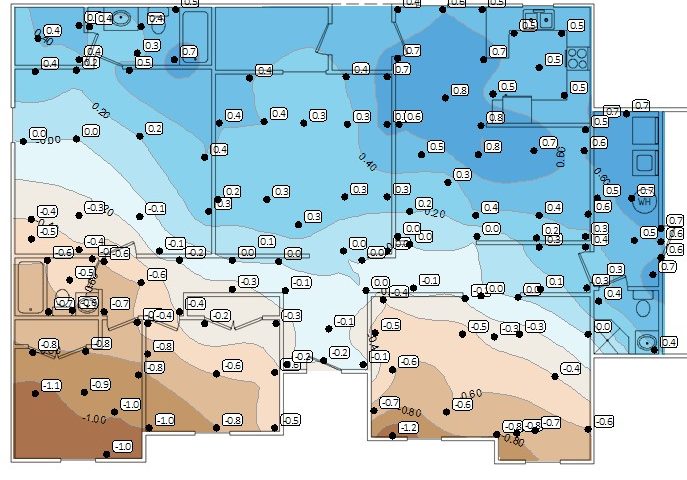 CA investigated whether the alleged distress at 28 residences located in Peñitas, Texas was the result of drilling operations which occurred in the area between 2007 and 2011. The investigation included a detailed condition survey of each residence as well as an elevation survey of each residence’s slab-on-grade foundation. CA reviewed applicable industry standards and relevant published literature regarding ground vibrations and damage to existing structures. The investigation did not produce any evidence to support the conclusion that the alleged distress in the residences was the result of ground vibrations from the drilling operations. CA determined that the observed distress in the residences was most likely caused by one or a combination of the following: dimensional movement of the structure due to temperature and humidity cycles, drying shrinkage stresses, foundation movement, and/or deficient construction.

CA investigated the structural adequacy of an as-built cast-in-place concrete cantilever seating structure in two levels of a sports venue’s grandstand. The cantilever section consisted of an almost 4-foot overhang. Sometime after placement, it was discovered that the cantilever’s tensile reinforcement was placed incorrectly. CA used ground penetrating radar scans to determine the actual reinforcement position, performed a structural analysis to determine the as-built capacity of the cantilever, and designed a retrofit to restore the capacity. CA performed a load test on the first section of repair to document the effectiveness of the retrofit solution. CA maintained a full-time field engineer to oversee and document the entirety of the grandstand repairs. 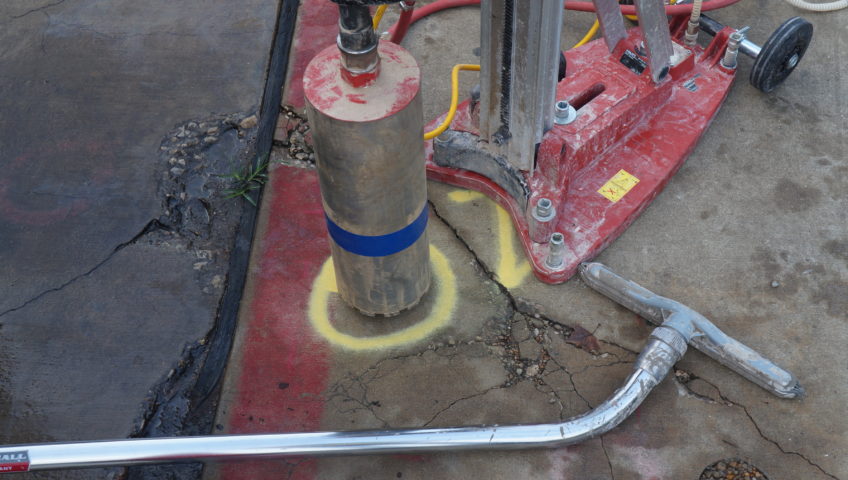 Several new structures for an oil-field equipment servicing company were constructed in 2012 in Houston, TX.  The structures were surrounded by three large reinforced concrete drive lanes utilized for delivery and pick-up of the large-size oil equipment parts.  Shortly after construction, the reinforced concrete pavement exhibited distress in form of spalled joints at dowel locations, pumping, and localized panel failures.  CA was retained to determine the cause(s) of the distress and provide repair recommendations.  CA’s field work included soil sampling and testing, non-destructive testing of the concrete pavement, including the use of ground penetrating radar, and relative elevation surveys to verify surface drainage patterns.  In addition to the field work, CA also performed an analysis of the pavement design to determine its structural adequacy as-designed considering the actual forklift and truck traffic.  CA’s investigation revealed numerous design deficiencies relating to the base material and pavement thickness considering the actual pavement loads. Certain construction deficiencies exacerbated the observed distress as well. CA provided a repair plan for the pavement. 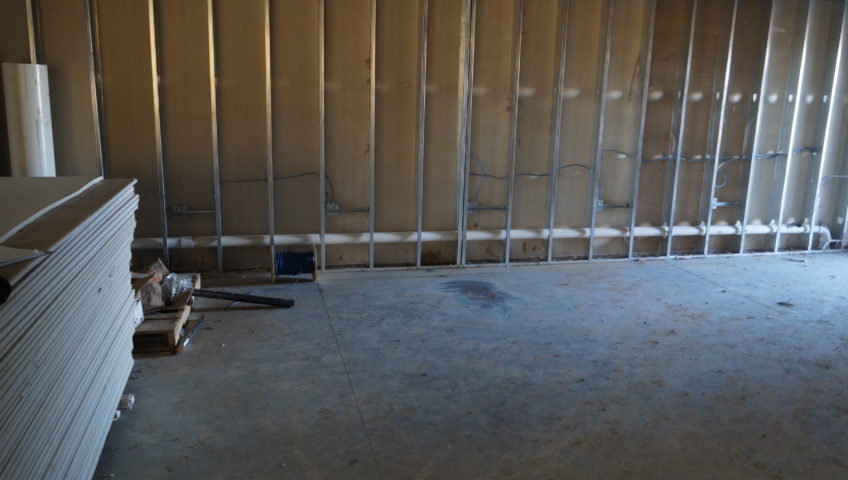 Carrasquillo Associates reviewed a 150,000 square foot interior slab-on-ground for a big box retailer in Cibolo, TX. The project specifications for the slab-on-ground finish incorporated strict aesthetic requirements.  Shortly after burnishing and cleaning the finished floor surface, the contractor was notified that the floor was unacceptable due to various aesthetic issues on the surface of the floor. CA extracted concrete core samples for petrographic examination of the concrete and finished surface. CA determined that the concrete floor was structurally adequate, but identified various deficiencies in the burnishing and/or cleaning operations which affected the initial hard trowel finish leaving a dull appearance and exposed aggregate at localized areas. 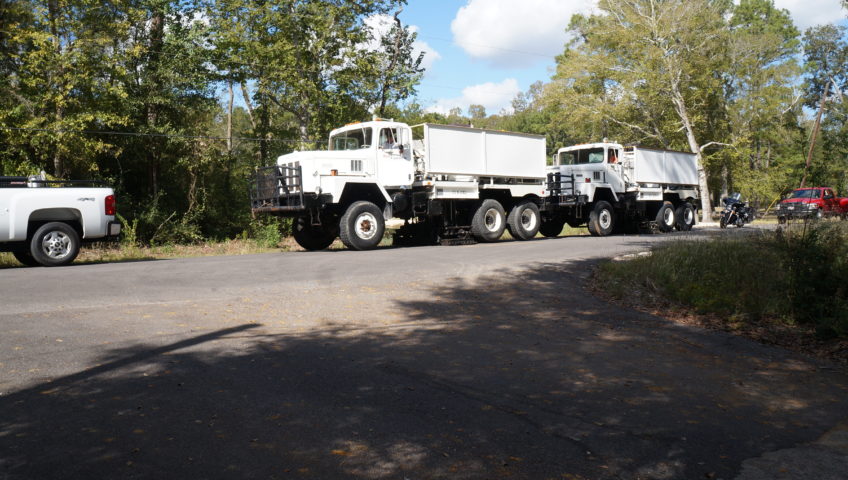 Carrasquillo Associates served as a third-party, independent engineer in the evaluation of numerous residential structures in close proximity to geophysical exploration in Beaumont, TX. CA investigated the alleged distress and assessed whether the conditions were the result of geophysical exploration. The investigation included reviewing and analyzing information from applicable industry standards and relevant published literature regarding ground vibrations damage .

Carrasquillo Associates provided recommendations for the repair of a slab-on-grade after numerous post-tensioning tendons were cut during the installation of various plumbing trenches as part of an interior renovation project. As part of the repair process, CA documented the condition of the slab-on-grade by performing a crack map and elevation survey. These were performed both before and after the post-tensioning repairs to provide reassurance to the facility owner that the repairs had not negatively impacted the structure integrity of the slab-on-grade. 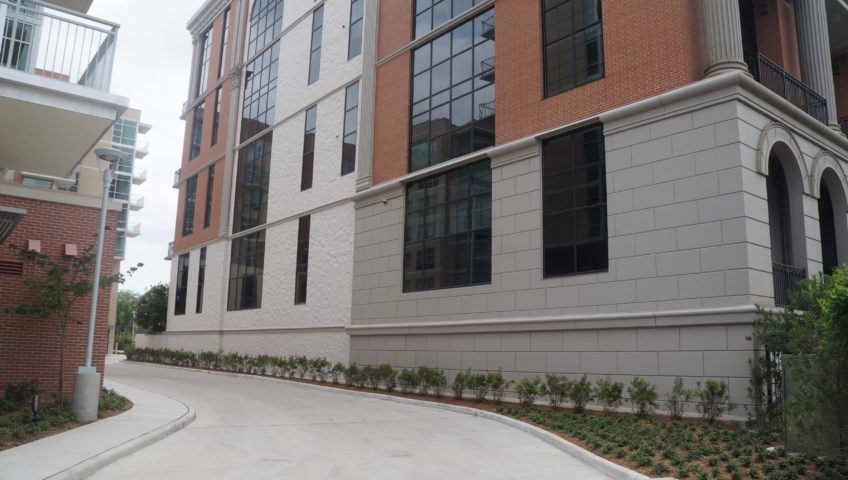 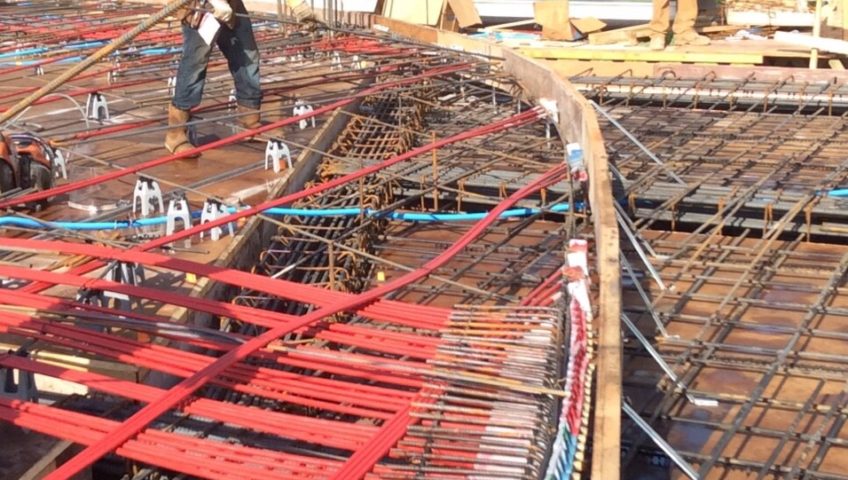 CA investigated a large post-tensioning blowout which occurred during construction of a complicated, unique portion of a 30-story residential tower. CA’s investigation was focused on reviewing the design and construction of the Project, specifically the post-tensioned slabs, as well as documenting and analyzing the conditions and circumstances associated with the post-tensioning blowout and subsequent repair. CA determined that the structural design did not consider the complexity of the blowout location. No direction was provided regarding the anchorage placement with regard to the curved slab edge and the close proximity of the distributed and banded tendons. CA performed a finite element analysis which showed that the blowout location experienced overlapping bursting stresses from distributed tendons and the banded tendons. This, combined with restraint and an upward post-tensioning force, resulted in a localized region of amplified tensile stresses. These amplified stresses made the section susceptible to a post-tensioning blowout failure during construction. The repair of the blowout area incorporated numerous modifications as compared to the original design, including the relocation of the distributed tendons away from the banded tendon anchorages. During the repair, the blowout did not re-occur, confirming that the cause and/or contributing factors related to the design had been eliminated and addressed. 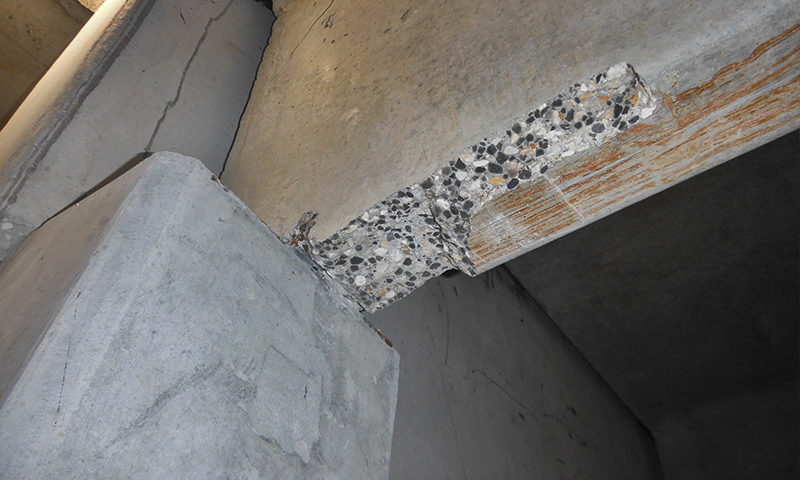 Carrasquillo Associates (CA) was retained in 2013 to investigate alleged construction defects in a precast parking garage supported by drilled piers near Austin, TX. As part of CA’s investigation, welds were inspected at broken precast connections, relative elevation surveys were performed near distressed areas, cracking was mapped throughout the structure, and a comprehensive finite element method (FEM) model was created for the garage. The FEM model allowed CA to analyze the effect of the measured support settlements to evaluate the cause(s) of the observed distress. Using this information, CA also evaluated the repair scheme being implemented to address the distressed areas throughout the structure.